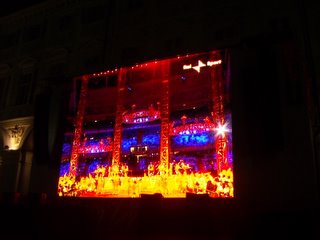 The cauldren is about to be lit here in Torino. The city squares are full of people watching big tv screens and the final arrangements to the city are over. The Olympic Truce moment in the Opening Ceremony was spectacular, creative and poignant. Beatriz and I are now in the Media Centre among around 30 other journalists. The city has become progressively busy today, though still no major queues around ticket offices.

We learned that the medals plaza will be open to non-residents and that 400 tickets will be available each night for those who try to obtain them.

A couple of nights ago, we saw the dress rehearsal of the opening ceremony, but they didnt include the amazing ferrari moment. The red lookof the city is in clear coordination with the TOROC look of the Games. There seems to be a good collaborative branding to both elements and the Cultural Olympiad has a strong, subtle and stylish presence around the city.

Tickets were hard to obtain today. The website was unavailble for some time and although cheapest options were shown available, it was not possible to select them. WE eventually accessed some from the ticket office near Medal Plaza where a very small queue had formed. Typically, each customer took around 20mins to serve as they had to pick which days they wanted to visit venues.Not simple.