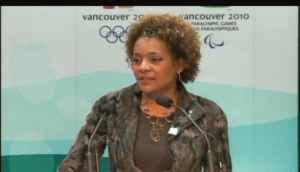 Just one day before the beginning of the Winter Olympics, more than 500 young leaders have met today (Thursday, February 11, 2010) with their Excellencies the Right Honourable Michaëlle Jean, Governor General of Canada, and Mr. Jean-Daniel Lafond, as well as other foreign dignitaries, government officials, special guests and Olympic athletes at the Vancouver Public Library’s Central Branch (350 West Georgia Street, Vancouver, British Columbia) to mark the Olympic Truce in an open dialogue. Presented as part of the Vancouver 2010 Indigenous Youth Gathering, the 2010 Olympic Truce Dialogue’s theme was Promoting Mutual Understanding.

The event, also broadcasted live online, featured artistic moments such as Indigenous dancing and hip hop performances as well as an intercultural dialogue that invited the audience to present and discuss the challenges that they believe their communities face and that impede peace together with the solutions they would suggests for the problems identified. Among the challenges mentioned were the lack of equality of opportunities, the limited political involvement and support, and the high incidence of social and health issues such as alcohol abuse or HIV/AIDS.  The young leaders in agreement with the other participants at the meeting agreed that dialogue can foster and support change, and investment in education and promotion of culture can positively impact communities.

“Empowering young people is empowering a nation” said her Excellency the Right Honourable Michaëlle Jean, Governor General of Canada, in her concluding remarks suggesting that the two key points of today’s meeting was the recognition of the contribution young people can have to promoting change, dialogue, peace and solidarity and the need of translating words into action. 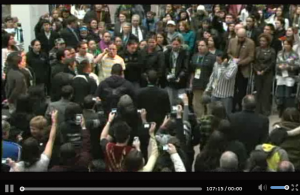