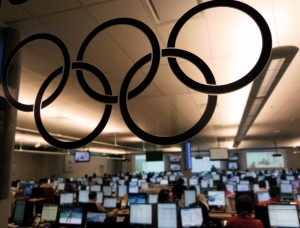 Atos Origin, the IT supplier of the IOC since the Barcelona 1992 Games and the worldwide IT partner of the IOC since the Beijing 2008, do not want to grab the limelight during this, or indeed, any games. In fact, they actively seek out to be as invisible as they can, knowing that the entire technical infrastructure, from press releases to results, to venue computer terminals and international media coverage depends on their ability to remain ubiquitous: a silent but incredibly important factor of mega events facilitation. An error in the delivery, a server crash or a system failure, could spell disaster for the whole operation.

The technical operations centre for the Vancouver Games, Atos Origin has its offices located at a distance from the events. It is there alone that they house over 800 services, 6,000 computer terminals and employ a team of more than 2000 working in 12 hours shifts to overlook and maintain the systems during Games time. Patrick Adiba, Executive Vice President of Olympic Games for the company states that their one goal is “delivering a flawless IT experience to athletes, Olympic officials, media, volunteers and spectators”.

Looking forward, Atos Orgin’s work has already began to prepare for the forthcoming 2010 Singapore Youth Olympics and London 2012 games – with plans to continue their work within the Olympic movement with Sochi 2014 and Rio 2016. At the same time, they are working with representatives, preparing the layout of infrastructure and finalising partnerships with mobile communication companies in the UK.

Atos Origin are working towards the generation of the “Olympic Data Feed”, designed together with the IOC, in order to aggregate all data streams to the newswires, websites and Olympic intranet in order to provide a consolidated source of information. In addition to this, Atos Origin are looking of ways to “virtualise” their current infrastructure to allow for less energy and hardware than was used during the 2008 Beijing Games.