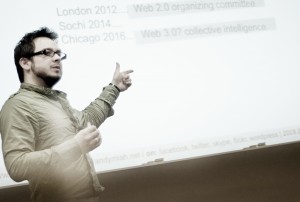 Continuing from the Beijing 2008 Olympic Games, Andy Miah, Co-Editor in Chief for C@tO, will be writing again for the Huffington Post during the Vancouver 2010 Olympic Games. The HuffPo is one of the USA’s leading political blogs, recognized as the second leading in 2009 by TIME magazine. We’ll be featuring some of these posts during Games time.