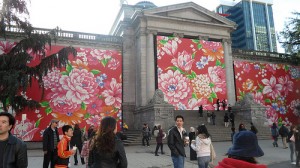 The Vancouver Art Gallery, located in Robson Square, which includes the British Columbia Canada Pavilion at its 4th floor,  is marking the 2010 Olympic and Paralympic Winter Games with a dynamic exhibition of British Columbia’s renowned artists.

This piece in particular had a big influence on modern artist, Jin-me Yoon, who uses it as a backdrop to her photo installation: ‘A Group of Sixty-seven.’ Remembering Canada’s lifting the immigrations restrictions to several Asian countries including South Korea, Yoon’s native land, the artist places images of Korean-Canadian immigrants in front of a traditional setting as a means to highlight the country’s move towards a more diverse demographic.

There are also interactive displays inspired by the BC forest and the green technology being introduced into the area. A focal point is the 500-year-old Spirit Tree, part of the BC Canada Pavilion at the Beijing Summer Games.

However, due to space limitations, the Vancouver Art Gallery is showcasing only 2% of its collections. Nevertheless, with the $50 million donation the Gallery received from the province of BC, the hopes are that more of these collections will be made available to the public.

”The long term goal is to build a gallery twice the size of the existing building. It will be an architecturally significant building. There will be an intense selection process for a local designer but the first priority is to find a suitable site in Downtown Vancouver” says Andrew Riley, Public Relations Manager of the Gallery.

Mark Hodge and Rachael McAllister are Master’s students at the University of the West of Scotland and are contributing to Culture @ the Olympics during their stay in Vancouver.