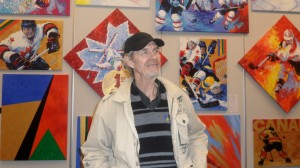 Artist Ken Wesman, who has been drawing inspiration from the Olympics since the 1988 Games of Calgary, is raising money for the YWCA in Vancouver, a non-profit organisation working mainly with children and women who have suffered from domestic abuse, by auctioning his Olympic themed paintings.

50% of the proceeds raised from the ’We Rock ‘ art exhibit will be given to the YWCA and are aimed to fund programmes designed to help educate children from deprived backgrounds.

Wesman, who is known for his seven official portraits created for the Calgary Games as well as for his later work, which was commissioned for the 1988 Seoul Summer Games, explained that he has a long history with the YWCA and the Olympics, and he believed that marrying the two together for the purpose of charity was a great idea.

“I’ve been associated with the YWCA for 45 years, helping with their programmes, teaching the kids. If we sell all these paintings the total would be quarter of a million, although I don’t think we’ll quite make that figure” he added.

The auction is located at the YWCA Hotel in Hornby Street where visitors can both view and leave bids on the paintings.  The auction closes on the February 28th.

Mark Hodge is a Master’s students at the University of the West of Scotland and is contributing to Culture @ the Olympics during his stay in Vancouver.