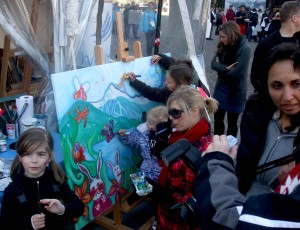 The Canadian resort town of Whistler, located 124km North from Vancouver, hosts many of the alpine sporting events during the 2010 Winter Olympics. Due to its welcoming thousands of spectators, Whistler also becomes a hub of cultural interest.

Taking advantage of the influx of  Olympic visitors, the Whistler Arts Council promotes the endives of local artists throughout the Village as part of its Arts Walk, which links 43 host galleries together hosted by a variety of spaces from coffee shops to hotel lobbies. However, it’s not only these locations that promote artistic interest. The centre of the village offers as well plenty of opportunities to explore or observe artwork.

Among these displays, the projects that aim to get the public involved are the ones that stand out the most. One such example is Oliver Roy’s , a self-described Snowboarder – Artiste, activity that involves putting a canvas out into the village and encouraging children to come add some paint to it and work with some of the draft designs already in place. 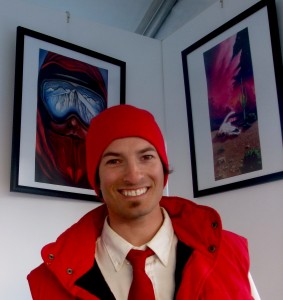 Standing outside his workshop tent, Oliver said: “There are about 8 kids constantly painting with us right now so it’s been very popular. We’re entertaining and there’s a good spectator pool. The Olympics allow us a great opportunity to showcase our art.”

The final pieces are to hang as a permanent fixture of Main Street, Whistler Library, long after the Games left the village.

Geoff O’Donnell is a Master’s student at the University of the West of Scotland and is contributing to Culture @ the Olympics during his stay in Vancouver.