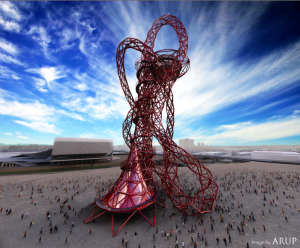 In the past month since Vancouver 2010 came to a close, London 2012 has made important strides in its progress towards its Games. It has appointed a new director for the Cultural Olympiad, Ruth Mackenzie, it’s been under fire for equivocating on the use of the concept ‘Cultural Olympiad’, and it has just approved the design of Anish Kapoor’s ‘Orbit‘ viewing tower for the Olympic Park (pictured). It will be the largest public art work in the UK, though has already attracted controversy. Regardless of your aesthetic taste, the headline is that an artist and an architect have pulled this together, placing art at the centre of the Olympic park.

Our latest article is by two of LOCOG’s regional Creative Programmers, Debbi Lander (Northwest) and Richard Crowe (Southwest) who reflect on their impressions of Vancouver, having spent time in the city during the Olympic Games. They emphasize the importance of approaching the Games time project not just as an opportunity to develop a legacy for the nation, but also for the creative sectors involved with building work around the programme. They also consider what presence work from the regions and nations will have in London’s cultural programme during Games time.