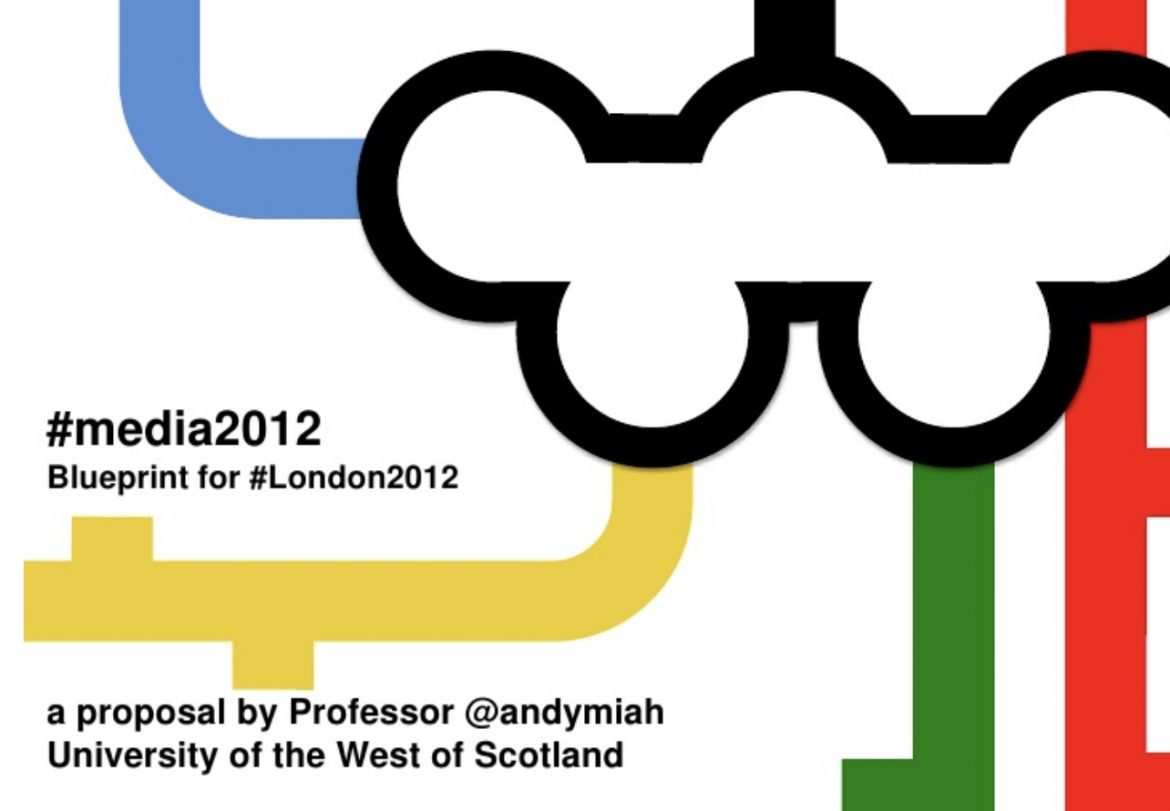 Days ahead of the LOCOG World Press Briefing, C@tO Editor Andy Miah is outlining a vision for the 2012 Games that draws together the nations and regions to collectively tell their story via citizen media. Find below  the outline for #media2012.

The proposal launch will take place on 4 Oct, 2010 in Manchester @ANDfestival (http://www.andfestival.org.uk).

Media Blueprint for London 2012
A proposal by
Professor Andy Miah, PhD
University of the West of Scotland

[please comment on the outline, so you can inform the next version]
1. Context

1.1 In 2009, the IOC indicated its intention to develop a new strategy for its role in a time of radical media change. London 2012 will be the first Summer Games to be informed by this new approach to promoting the value of social media

1.2 The London 2012 Games coincide with the scheduled targets set by the Digital Britain report & Race Online 2012, indicating a new era of potential media engagement. This provides an opportunity to re-think the new media infrastructure within the United Kingdom.

1.3 The Games represent the largest media event in the world, with broadcasters from over 200 countries covering what happens.

1.4 I envisage the Games as a media festival rather than a media event, where the media are enabled to report much more than just the sports competition. The Cultural Olympiad should be at the heart of this festival of ideas.

1.5 Olympic & Paralympic media centres have the opportunity to shift from being spaces of information and mediation, to becoming factories for creativity, collaboration, and engagement, which can amplify the Olympic mission.

1.6 The London 2012 Media Landscape will include 13,000 broadcast journalists, 7,000 print journalists, who will cover sport. There will be an additional 12,000+ non-accredited professional journalists who will want cover all non-sport content. However, the largest population of reporters will be citizens, over 60,000,000 with camera phones wanting to report their Games.

1.7 If the Olympic movement can expand media participation without jeopardizing its financial base, then it can more adequately fulfil its role as a progressive social movement.

1.8 Olympic cybercitizens are already taking ownership of reporting their Games and they will need a structure for their participation in 2012.

1.9 In this context, the London 2012 Games can be a moment for realizing a new media legacy for the United Kingdom, built on the idea of citizen media reporting and the recognition that the Games are more than just sports competitions. They are social movements with high humanitarian and cultural aspirations.

1.10 To achieve a broader media participatory culture, it is necessary to develop an extended media network for Games time reporting, which builds on the strategic development of non-accredited media centres at previous Games, linking them to citizen media projects.

1.11 Such a network would be founded on principles of ‘open media’ and will facilitate community legacies and build stories about London, the Nations and the Regions that reach an international audience. It will focus on reporting all non-sporting legacy stories, locating culture and art at the heart of its practice. Its work will transcend national boundaries in ways that no other Games has achieved before, by promoting peer-to-peer conversations.
2. A Nationwide Independent Media Backbone

Reaching out to all regions, with hubs in Glasgow, Manchester, London

2.1 This apolitical dream space will bring into force the full commitment of Olympic ideology to promote social change for the good of humanity. These values accord with the philosophy of Olympism.

2.2 Funding is in place to develop the initial scoping for these infrastructures, by identifying partners and commitments from institutions who would host and stage reporters. Principally, this will involve staging an event for potential partners and contributors at the Abandon Normal Devices digital media Festival on October 4, 2010.

2.3 We will focus discussions on operational challenges, collaboration logistics and infrastructure aiming to bring representation from the IOC and LOCOG and the potential UK partners.

2.4 The media who work in such centres should have a local interest but an aspiration that is based on global values or the desire to build opportunities to share globally. Transcending national boundaries is the biggest task. We’re not yet global, despite digital culture
3. Goals

3.1 Augment the Olympic media narrative towards portraying broader dimensions of the philosophy of Olympism

3.3 Promote community legacy for the nations and regions
4. Research Led

4.1 The centres will function as real-time experiments, providing focal points for understanding the social media community and its interface with mass media.

4.3 The International Olympic Committee can focus its conversation with citizen media around these hubs
5. Values

5.1 Through the Olympic & Paralympic Games, we want to create space for intercultural dialogue and collaboration.

5.2 We value the Olympiad as a time to address issues of critical social importance for Britain.

5.3 We will support communities to tell their Olympic & Paralympic stories and work with professional journalists to meet their needs.

5.4 We want to expand media privileges to concerned citizens.

5.5 We promote responsible and fair journalism in an open media culture, where content is shared and power distributed.

5.6 We will respect the right of groups to express their political views and support different voices in being heard
6. Need

6.1 The Olympic & Paralympic media are focused on sports almost exclusively during Games time, but this can and should encompass broader legacy stories.

6.2 Digital media has given rise to a proliferation of citizen journalists who want to report the Games.

6.3 Legacies for the Nations and Regions, along with London’s story need other media centres to have space to explain what the Games have meant to them.

7.1 The bid promise from London 2012 was to create a national Games, but we would be the only media centres to tell those stories.

7.3 We are a not-for-profit infrastructure, fostering educational practice and public engagement with the Games.

7.4 Through our network, we will constitute the largest network of social media producers throughout the UK and reinvigorate the core media partners of the Games.

7.5 Our content will reach international networks that other media will not reach.

7.6 Our journalists will produce the largest volume of Olympic content and influence trending topics on social media platform, crating the largest Olympic and Paralympic archive of any Games.
8. Why accredited Olympic media will need us

8.1 Media organizations in the UK will traverse the country around Games time, requiring facilities and stories we can provide, particularly around the torch relay.

8.2 To fully report on the London 2012 Games, it will be necessary to see what is happening in the Nations and Regions.

8.3 The Olympic Games is a social movement, not a sporting event. What happens in the country will become its central legacy

8.4 While the proposal should aspire to build a network that includes all nations and regions, it will be useful to begin with a hub of centres based on known interests. Glasgow, Manchester & London presents a backbone for the network.

8.5 These centres will draw stories from each other to communicate what has been happening and what is happening during Games time. However, events should also build on global networks, particularly previous Games experience to develop the idea of a cultural legacy that extends beyond London. Satellite centres will provide programmatic content during the Games.
9. What was achieved at previous Games: Vancouver 2010

9.1 True North Media house accredits a 5 yr old as a journalist and an Olympic mascot.

9.2 W2 is the first independent media centre to work with an Organizing Committee for the Olympic Games.

9.3 VANOC appoints a number of young people to be its official citizen journalism team during the Games
10. What will these media hubs look like?

10.1 The influence of any specific media centre will be restricted by its funding, its technology and its community, but primarily the latter. Hub centres can be high-tech facilities with large venue space, but all should aspire to similar networked facilities to maximize participation. We all should be able to plug into each others’ space at any time to deliver audio, visual and interaction.

11.1 As part of the initial scoping, we will identify primary partner vehicles, which may be digital media centres around the UK that could have the capacity to deliver a media centre during Games time. However, communities should also be evaluated on their networked potential ie. How prolific are they online. Amplifying their content will be our biggest asset to achieve our goals.

11.2 With 2 years before the Games, this is the time to establish permissions and funding. However, this is still a relatively short amount of time to build partnerships with larger organizations, those who may decide to allocate their programme budget to such a project. This may be the primary route towards ensuring the proposal is realized.

In closing, this proposal brings together the primary instigators of independent Olympic & Paralympic media centres and creative, artistic practice from the last 10 years of the Olympic & Paralympic Games. With the right support, it has the potential to tell the full story of the London 2012 Games
Stay in touch, join:

About the Author
Professor Miah is Chair of Ethics and Emerging Technologies at the University of the West of Scotland, a Fellow at the Foundation for Art and Creative Technology and part of the Programming Committee for the Abandon Normal Devices Festival, an ‘inspired by 2012’ event, funded by the Legacy Trust.

Professor Miah is an Olympic scholar and writer, having undertaken research into Olympic media at every summer and winter Olympic Games since Sydney 2000, at which he has also worked as a journalist. He has been a visiting Professor at the International Olympic Academy, a Visiting Scholar at the International Olympic Committee museum in Lausanne and teaches Olympic Studies at the University of the West of Scotland, supervising PhD students whose work focuses on Olympic media. While at the Vancouver 2010 Games, he wrote for The Huffington Post, facilitated cultural collaborations between London 2012 and Vancouver 2010 and was on the steering committee for the creation of two independent media centres. He also writes for the Guardian. He is currently completing a book called ‘A Digital Olympics’ for The MIT Press.