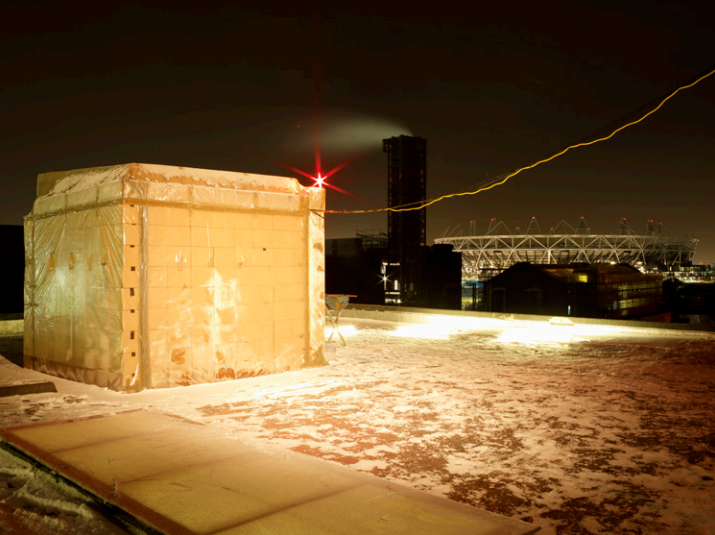 In January, participants at Birkbeck’s conference on the links between Barcelona 1992 and London 2012 were invited to an Olympic site perimeter walk during which we saw Jim Woodall’s ‘Olympic State’ artist project. This is not an intevention that you are likely to find with an ‘inspired by 2012’ logo attached to it. Read the press release below, link to the website and, above all, try to see it for an unrivalled perspective on the contribution of art to the Olympic Games and a great view of the Olympic park.

For two weeks in December 2010, artist Jim Woodall occupied the rooftop of a building overlooking the Olympic Park construction site. Sleeping in a selfmade hunter’s hide constructed from locally found materials he watched the vast site through a bank of CCTV monitors that lined the walls of his ‘control room’. Images of the Olympic security camera rigs, factories spurting smoke, and security vans touring the grounds through foggy dawns and twilights relayed to this screens. Like a hunter or a twitcher, he observed unseen. For this exhibition, the hut is reinstalled in the gallery, acting as a monument to the legacy of the performance. The entire two weeks of recorded CCTV footage
will be replayed on the interior screens. Lining the walls, screen shots of dawns,
dusks and ‘events’ will show an abstracted timeline