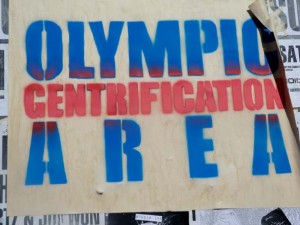 The book will be published by Myrdle Court Press in 2012 and will collect the range of critical creative responses that have occurred since the governing bodies choose to bid for the 2012 Games. The book will also present an overview, history and critique of the Cultural Olympiad and in doing so will argue against the corporatisation of urban space. The critical work, projects and ideas published will be indispensable for citizens of future bidding cities.
www.myrdlecourtpress.net / www.thisisnotagateway.net

Artists and editor of the book, Hilary Powell has invited and collaborated with each convenor to produce a weekend of five salon roundtable discussions from book contributors and invited participants drawing out some of the issues within the book.

The sessions will be recorded and an edited version will form a contribution to the final book.

The very word ‘legacy’ is perhaps the most discussed and doubted area of Olympic project. This discussion bringing together various projects within the book that question and examine the idea of legacy from analysis and speculation to visionary dystopias and alternative propositions.

Led by Iain MacRury, Director of London East Research Institute, UEL and author with Gavin Poynter of ‘Olympic Cities: 2012 and the Remaking of London’ (2009, Ashgate, London).

11am -1pm at the View Tube
The Greenway, Stratford, London.
http://www.theviewtube.co.uk/

This salon discussion brings together an eclectic body of photographers who have been producing work featuring the spaces of the future Olympic Park. These photographers, all contributors to the book, will debate their own and each others’ work in relation to the official imaging of the site. The overall aim will be to consider the agency of photographic images in urban change, considering photographs as documents, provocations and representations of sites in transition.
The salon is inspired by extends and feeds into the collaborative project ‘Picturing Place’ an interdisciplinary research project which critically explores the role of images and image-production in processes of urban change. http://www.picturingplace.net

Led by Dr Ben Campkin, Director of UCL Urban Lab and assistant director of Architectural Research at the Bartlett School of Architecture whose interdisciplinary research investigates processes and representations of urban and architectural degradation and regeneration.

2-4pm at the View Tube
The Greenway, Stratford, London.
http://www.theviewtube.co.uk/

Examining the tension between inside and outside both in terms of officially commissioned projects and those (of which the book is primarily made up of) operating outside of this framework and between the park site and its hinterlands through an idea of the ‘fringe’ and infringements both culturally and physically.

Led by Anna Hart who leads AIR, a research, teaching and commissioning studio at Central Saint Martins which explores a durational relationship between artist and site.( http://www.archwayinvestigationsandresponses.org/)

The Olympic event rests on the production of a clean, blank space, shielded from the city, its history and the possibility of dissensus. This absolute space is, in the case of London 2012, protected by military-grade security –including an electrified fence and intensive CCTV surveillance. This salon brings together artists who have challenged, and even penetrated, this space of reinforced consensus. Their work, making use of a wide array of tactics, confronts the attempt to regulate what can be seen, said, or thought brought about by the mega-event.

Convened by Anna Minton, journalist,writer and author of ‘Ground Control: Fear and Happiness in the 21st Century City.’ (To be republished in 2011)

Co-organised by Isaac Marrero, post doctoral research fellow at Birkbeck College with the project ‘The militant city: art & politics in the Olympic city’(http://themilitantcity.wordpress.com)

Thanks to Andreas Lang, Isaac Marrero and Ben Campkin, all convenors ,participants and book contributors, Daren Ellis of See Studio, Rosie Murdoch and all at the View Tube, Bean and all at performance space,Trenton Oldfield and Deepa Naik of Myrdle Court Press and This Is Not A Gateway.