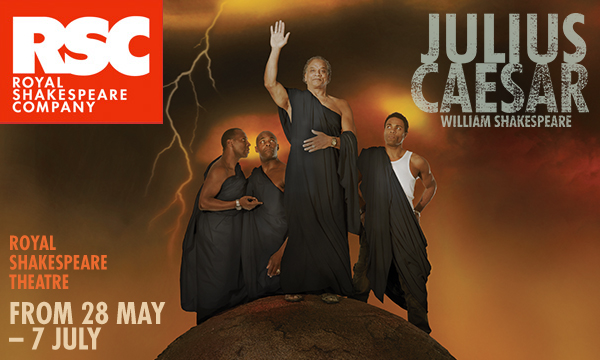 This week, the Noel Coward theatre staged a new commission within the World Shakespeare Festival, part of the wider London 2012 Festival. The Royal Shakespeare Company play forges an unlikely relationship between the leading British director Gregory Doran and Nelson Mandela. This classic Shakespearian play was staged within an imagined Africa, which the director explains is the perfect and natural home for what the director discovered was “Shakespeare’s African play”.

The production was original, insightful, compelling, powerful and wonderfully performed especially by Paterson Joseph, who played Marcus Brutus and Ray Fearon, who played Mark Antony Together, their depth and range brought strength to other actors, spurring them towards greater performances. The female lead roles of Adjoa Andon playing Porsche and Ann Ogbomosho , playing Calpurnia, were also outstanding.

In a questions session after the show, Doran explained how Nelson Mandela had a copy of Julius Caesar while in prison and that he scribbled notes and highlights in sections or paragraphs that meant something to him, of which one is:

“The valiant never taste of death but once.
Of all the wonders that I have yet heard,
It seems to me most strange that men
should fear,
Seeing that death, a necessary end,
Will come when it will come.”

For many people, Mandela is a symbol of struggle, perseverance and integrity but he is also an ambassador for the Olympic Games. It seems even more fitting therefore that his life shaped the vision behind this play, given its relationship to these global Games.

This production of Julius Caesar and the wider WSF is a huge achievement for London 2012 and good for the Olympic movement more widely. To examine Shakespeare through a global lens, creates a new impression of his worth and relevance to many nations, not just Britain.

The show can be seen from 8 August to 15 September at the Noel Coward theatre, London.