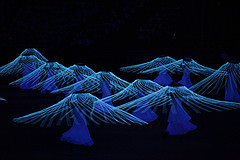 Contrary to what has been suggested in so many British Media, the Sochi 2014 Opening Ceremony did not follow on the steps of London in its approach to representing the dove of peace. Some commentators have suggested that the aery performance by a corps the ballet led by prima ballerina Diana Vishneva, was reminiscent of London’s “winged cyclists who flew into the air as Arctic Monkeys played”. This is quite a stretch of a comparison, which apparently ignores the long established tradition (and a compulsory requirement by the IOC) of dedicating a segment of the Opening Ceremony to the dove of peace, symbolising the wish for the Games to achieve an Olympic Truce – a stop of all wars – at least for the duration of the sporting competitions. This is the Modern Games attempt at taking on Ancient Olympic values, where athletes, most of them soldiers, were always granted safe passage to the Games.

The presentation of the dove of peace within the Ceremonies was first staged in 1920 at the Antwerp Olympic Summer Games, with real doves being flown into the air. But this tradition came to an abrupt halt in Seoul 1988, when thousands of spectators on the stadium and millions of TV viewers saw in horror how many of the freed doves ended up roasting in the Olympic flame, as the cauldron was lit shortly after they had been released. Since then, the tradition is to present the dove of peace symbolically and so, this has become yet another opportunity for artistic interpretation and creative surprise.

While London introduced an edgy (and environmentally friendly?) concept by bringing in the bikes, Sochi has created a completely different and innovative approach by reinterpreting one of the most iconic ballet compositions of all time, Swan Lake, and using this as an inspiration for a beautifully simple but sophisticated staging. In the performance, dancers could be imagined as a dove or a feather, simply through the graceful swinging of illuminated ribbons which at several points, thanks to the dancers masterful spinning, seem to take flight. This was not mere acrobatics and technological wizzardy. It was first class ballet offering a new take on a century-old ceremonial episode.

Another memorable representation of the dove of peace was staged in Torino 2006, where acrobats joined in to form a breathing and moving dove opening up from a hanging wall, while Nagano 1998 released thousands of ‘eco-friendly’ dove balloons.

With Opening Ceremonies, media commentary is often quite shortsighted and ignores the fact that we have now over 118 years of iconic ceremony moments and an approach to scenography that can be understood as a separate artistic form in its own right. Inevitably, a show on this scale, requires a reliance on certain conventions that can make a ceremony resemble the next. But let’s not suggest that a ceremony creator is copying or replicating their predecessors simply because certain forms are an unavoidable requirement of a spectacle staged on a 40,000 to 80,000 seated ‘theatre’ the stadium and designed for worldwide TV watching.