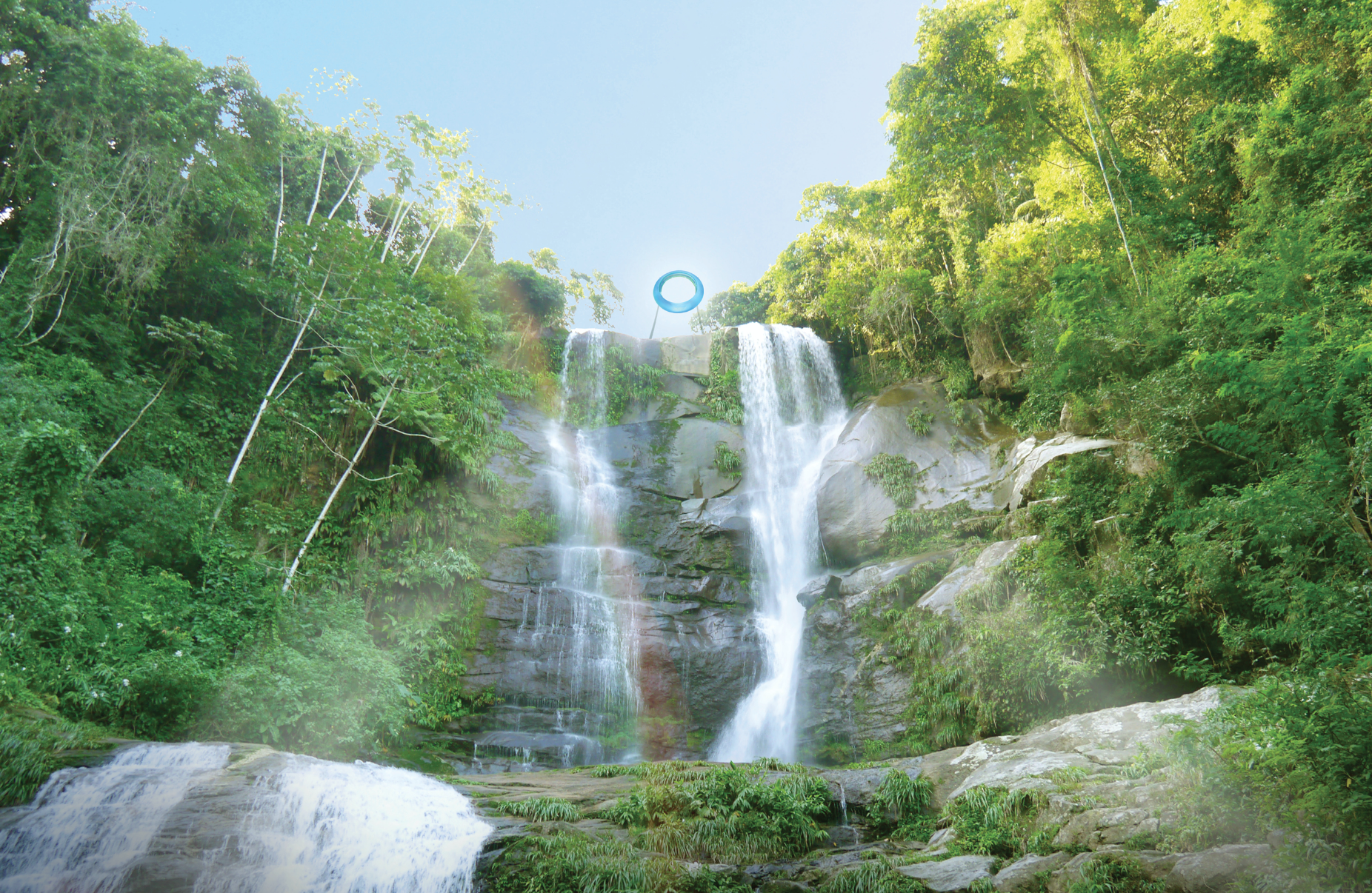 As one of the hallmark art installations of the Rio 2016 Olympic Games, the Faou Foundation announces Ring: One with Nature, a permanent installation by the acclaimed Japanese contemporary artist Mariko Mori.

Highlighting Mariko Mori’s artistic and intellectual practice to combine science, technology and nature, the new work features a luminous ring suspended at the peak of a 58-meter-high cascading waterfall. The permanent installation is situated at the top of the Véu da Noiva waterfall, meaning “the veil of the bride,” located in Muriqui, Mangaratiba, in Rio de Janeiro State. Ring: One with Nature was officially premiered on August 2, 2016. In the lead up to the Opening Ceremony artist Mariko Mori took part as an invited participant of the official torch relay. The Ring will remain in the location after the Olympic and Paralympic Games.

Mariko Mori’s Ring: One with Nature is  an emblem of beauty in its surroundings of Brazil’s renowned rainforest, a wish for peace and harmony, and a reminder of every being’s timeless connection with the earth. As the sun illuminates the work from different angles, Ring will change its color, transitioning from hues of blue to gold. In August 2016, Mori will create a new ring as a unifying symbol of humanity and nature. It is a unique environmental marker for Brazil. Mariko Mori’s Ring: One with Nature promotes environmental awareness and is an expression fitting to the ideals of sustainability, biodiversity and conservation, to ensure environmental protection on an ever-more crowded planet.

The artist Mariko Mori comments, “Ring signifies oneness, eternity and completeness. It is a true privilege to present this work during a moment of international unity that is the Rio Olympic Games.”

Ring is Mariko Mori’s second and most ambitious work to date to be realized by the Faou Foundation and is part of the Foundation’s larger mission to place site-specific artworks on the six habitable continents. Ring is preceded by the artist’s 2011 installation of Sun Pillar at Seven Light Bay on Miyako Island, Japan, as part of a paired work in progress entitled Primal Rhythm.

Ring: One with Nature has the cultural endorsement of the Celebra Cultural Program established by the Rio 2016 Olympic and Paralympic Games. Ring will be permanently installed and gifted by Faou Foundation to Instituto Estadual do Ambiente (State Institute of the Environment, Brazil), and State of Rio de Janeiro.

For more information on the Faou Foundation, the artist or further details on Ring: One with Nature, visit http://faoufoundation.org.

Faou Foundation is a non-profit organization established in 2010 by the acclaimed artist Mariko Mori. Faou sets out to gift monumental art installations to promote environmental awareness around the world by installing site-specific works, each in a unique ecological setting on each of the six habitable continents. Each work becomes an emblem of awareness, education and gratitude to protect the planet’s diverse eco- systems and natural resources. The ethos that Faou wishes to inspire is, “One with Nature.” http://faoufoundation.org/

Her work has also been included in major biennales around the globe such as Venice, Istanbul, Sydney, Shanghai, São Paolo and Singapore. In 2013, as part of a partnership between La Fenice Theatre in Venice and the Venice Biennale, Mori was commissioned to design the costumes and sets for a production of Madame Butterfly.

Mariko Mori established the Faou Foundation in 2011 and is represented by Sean Kelly, New York and SCAI the Bathhouse in Tokyo.