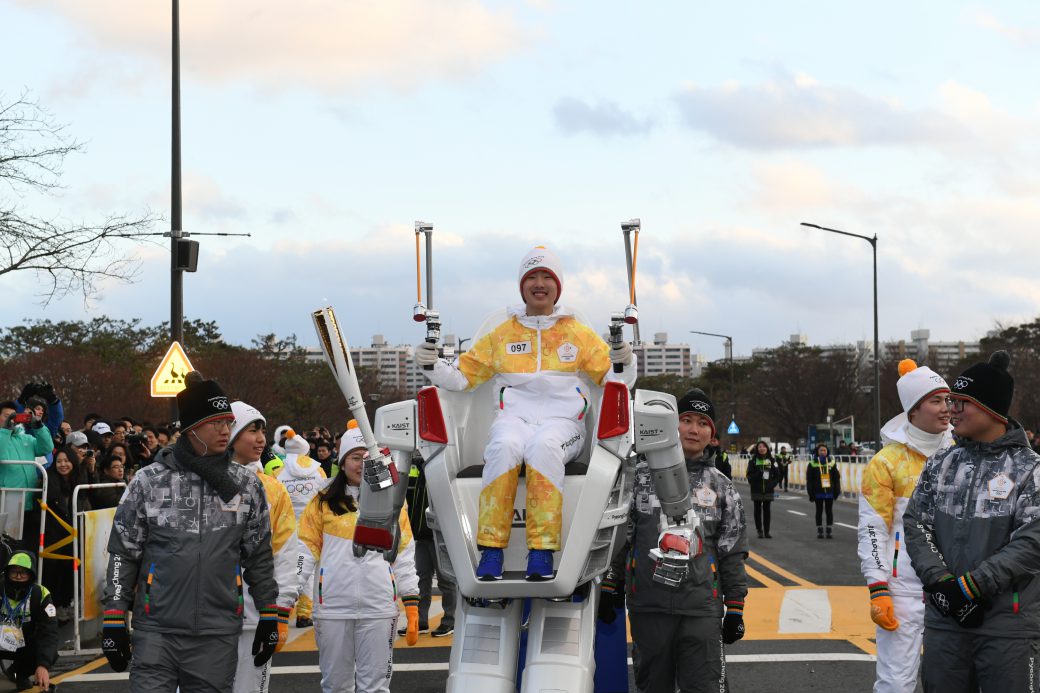 PyeongChang, December 11 – Day 41 of the PyeongChang 2018 Olympic Torch Relay saw a special appearance from Robot HUBO as the message of ‘Creating new horizons’ was highlighted by showcasing some of Korean’s best technological innovations.

HUBO was the second torchbearer of the afternoon at the Korean Advanced Institute of Science and Technology (KAIST) in Daejeon. PyeongChang 2018 Organizing Committee President LEE Hee-beom was given the honor of lighting the flame for the day and passed it onto world-renowned robotics professor Dr. Dennis Hong. Dr. Hong took the torch on a short trip in a vehicle driven by a robot before passing it over to HUBO. HUBO covered 150 meters, and performed a disaster rescue operation then passed the flame onto Professor OH Jun-ho – the man responsible for developing Korea’s first humanoid robot HUBO.

Today’s relay celebrated information and communications technology (ICT) as Professor OH handed the flame over to FX-2, a human-operated robot that was controlled by an aspiring scientist and student, who also received and carried the flame [see attached image].

POCOG President LEE Hee-beom said, “Today’s special Olympic Torch Relay celebrating ICT was a fantastic display of innovation and creativity. ICT is a very important part of the PyeongChang 2018 Winter Games as we aim to be the most connected and technologically advanced Games ever. Today was a chance for us to show the world some exciting technologies that will be showcased during the Games.”

Daejeon is known as the science city of Korea, and is home to many research and development centres of corporations and institutions. KAIST has played a central role in the field of industrialization and information innovation by educating the nation’s top science talents, including more than 10,000 PhD students and 58,000 graduates.