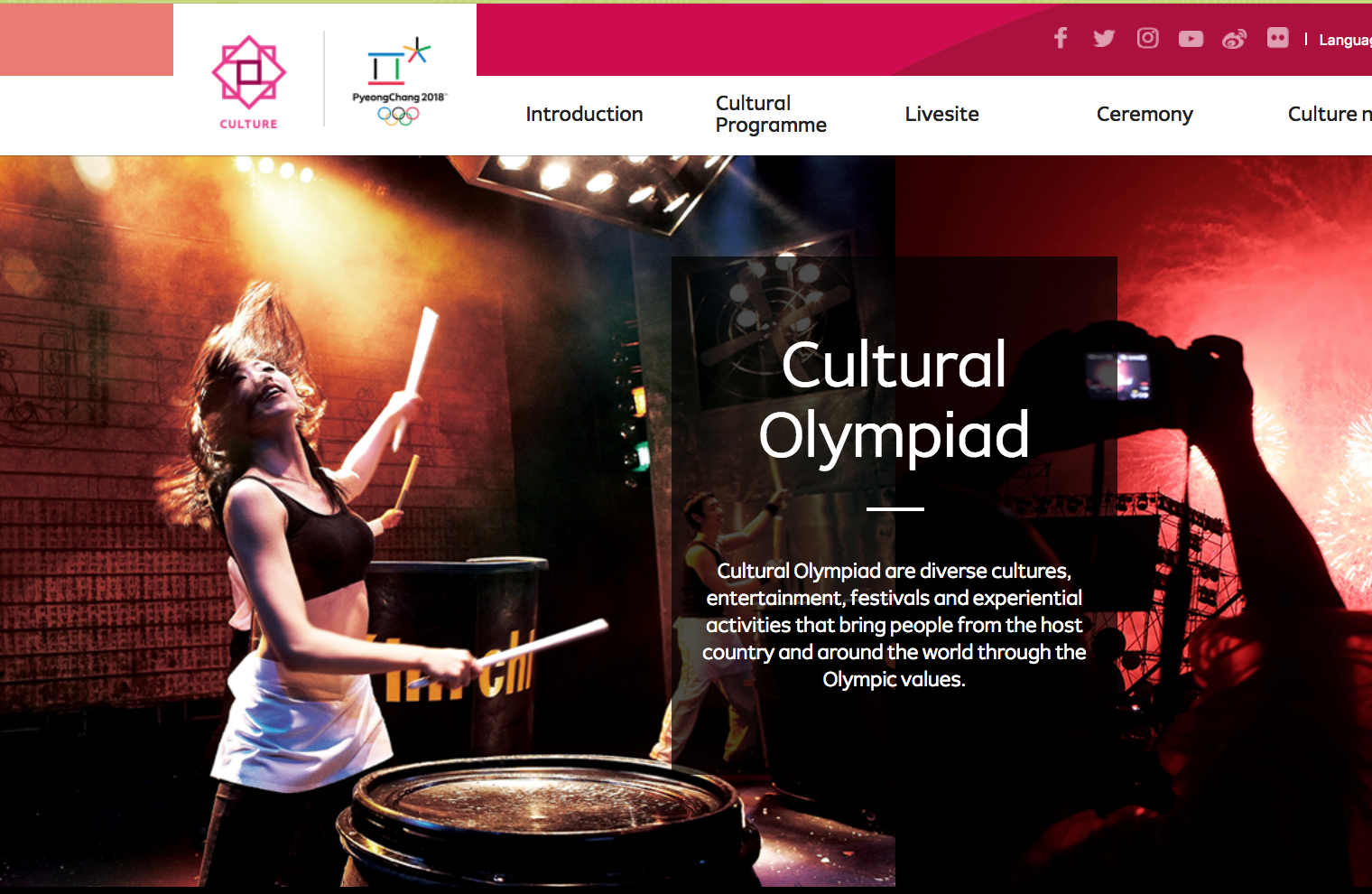 Do not fight it. Simply lie back and let the wave engulf you. Led by artists such as Nam June Paik, film directors such as Kim Ki-duk, and of course pop sensations, including the phenomenon that is Psy (he of Gangnam Style mega-fame), Republic of Korean culture has been slipping and sliding its way across the world for the past 20 years.

The PyeongChang 2018 Cultural Olympiad aims to propel this to the next level.

“It has been a combination of historical power we have accumulated from long ago, which has met and fused with contemporary culture and blossomed thanks to the internet and mobile technology,” Kim Dae-hyun, director general of Culture and Ceremonies at the PyeongChang 2018 Organising Committee (POCOG), said.

“This has helped us compete with the big countries.”

The combination of the old and the very new will be at the heart of the Cultural Olympiad. Traditional dance will be showcased at ancient pavilions and, thanks to the wonders of hologram technology, K-pop concerts will be played to a live audience despite the artist being hundreds of kilometres away.

“I hope the technology will wow visitors but we won’t forget the analogue culture we have, which ultimately directs everything we do,” said Kim, clearly excited at the prospect of introducing new audiences to the wonders of Rep. Korea, past and present.

“When I started this job I focused on seeing things through the eyes of foreign visitors, trying to understand what they would want to feel and enjoy, because if the foreigners like it then I know the Koreans will like it too.”

The presence of the late Nam June Paik’s work – the man widely considered to be the founding father of video art – will give the Cultural ICT zone genuine heft. This sense of global relevance will only be increased by the presence of Lee Yongbaek’s work. The ground-breaking multimedia artist will install a piece near the venue for the Opening and Closing Ceremonies. At the same time, such gravity is neatly offset by numerous interactive opportunities, such as pottery and china-making, and by the behemoth that is K-pop.

“Every foreigner wants to know what is behind K-Pop. Korea is really a very small country but K-Pop is very powerful, a huge force,” Kim said. “It is traditional culture meeting high tech.

“There are many traditional types of Korean music; Pansori, Minyo and Chang. These are all well developed and they have collided with international pop music and produced K-Pop. (Artists) like Psy and Girls Generation have blossomed thanks to this collision of Korean music with world music and technology.”

The figures are scary. In November 2017, five years after it was released, the music video for Psy’s Gangnam Style song was knocked off its spot as the most watched clip on YouTube after a quite staggering 2.8 billion views.

“It is different to Beatlemania but not entirely,” Kim said. “They (the fans) express themselves very differently, through social media, but the feelings are similar.”

For cultural action which retains a sports bent, organisers are again leaning on Rep. Korea’s advanced audio and visual skills. In the live zones scattered across the PyeongChang area, fans will be encouraged to put on virtual reality headsets and see what it’s like to fly down the ski jump or drive a bobsled at 150kmph.

Kim hopes the combination of these hugely varied experiences will mean the tens of thousands of international visitors return home and spread the K-wave ever further. For the domestic audience, there are long-term plans too.

“In terms of stages, performances and displays, it is all transient but the legacy comes from the documented material we produce,” Kim added. “In terms of physical legacy, we are creating a national bell to stand in the traditional culture zone, a replica of what is in the Sanwonsa temple (in the Odaesan Mountain, PyeongChang County), which will stay as a monument.

“In Alpensia the Gangwon Provincial Government is creating a pavilion, which looks very similar to both the Hyangwonjeong (pavilion) in the Gyeongbok Palace in Seoul, and to traditional Korean houses. There are very few of those in the PyeongChang area so that will be left as a legacy.”

Plans and preparations look well set but there is one challenge left which Kim acknowledged is not 100% certain to be met.

“At the moment the public are not showing huge interest in the Olympic Games,” he said in October 2017. “We are hoping there will be a big push right at the end, but currently the mood is not hot. Hopefully the torch relay will do this.

“We are a little similar to Brazilians like that.”