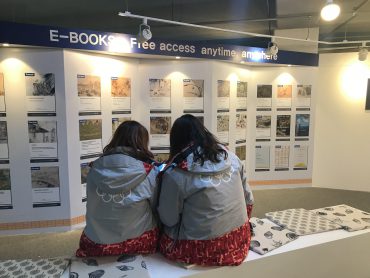 The Gangneung Media Village boasts a large library within its main dining hall. Journalists can access a wide range of world literature as well as getting close insights into classic and contemporary Korean literature, including[…]

Days ahead of the LOCOG World Press Briefing, C@tO Editor Andy Miah is outlining a vision for the 2012 Games that draws together the nations and regions to collectively tell their story via citizen media. Find below the outline for #media2012. The proposal launch will take place on 4 Oct, 2010 in Manchester @ANDfestival (http://www.andfestival.org.uk).

Following the model of BCMC the village of Whistler, one of the main hosts of the Olympic outdoor competitions, has put together a similar centre catering for the media in town interested in following stories out the beaten Olympic track: the Whistler Media House. This article also features a list of digital resources for the Winter Games.

City officials are using the Winter Olympics as a platform to show the world they are leading the way with green energy. Throughout the city, pavilions have been set up to promote and educate people about environmental issues. Live City Vancouver in Yaletown is one example of this initiative. This is where the Vancouver House is located, showcasing ‘Vancouver Green Capital’, an economic development programme which highlights the work of local entrepreneurs and community leaders.

Citizen journalism is nothing new to our world of available technology. It has become second nature for people to capture their experience, events or news in their environments on their phones, cameras or computers. We[…]

Web editor of Culture @ the Olympics (blogger and PhD student) Jennifer Jones was featured in a short video by Vancouver City Hall which was captured during the opening celebrations of W2 Media and Culture House. The series documents stories from Vancouver – from the people who live and visit the city.

Our Editorial Assistants, Ana ADI and Jennifer Jones, were live on CKNW on Tuesday, February 16, talking about their coverage of the Olympics so far. They joined Jill Bennett’s International Media Panel with, her other guests, John Crumpacker of San Francisco Chronicle and Florian Zut of Swiss National Television. During the one-hour show the four journalists discussed their coverage of the Games, culture at the Olympics and the relation and differences between traditional media and citizen journalists.

This is the 2nd of several Vancouver 2010 Olympics photo essays created by Kris Krüg. Vancouver is filled with energy now that 2010 Winter Olympic Games has officially started. The last week has been filled[…]

With 4 days until the Olympics begin in Vancouver, Bell, Canadas’ largest phone network offered a taste of the world’s first all-IP (internet protocol) Games. This is the first Olympic Games, in history, to be broadcast and shared across a fibre, digital infrastructure.

In an attempt to start assembling journalists that will be in Beijing, I’ve put together a Facebook group to share impressions, understanding and knowledge about orientation. If you’re going and you’re covering the Games as[…]